Esther has severe clubfoot. Too poor to be treated as a baby, she spent her first five years walking very painfully on her ankle.

If nothing was done, Esther’s leg would wither. Her limp would slowly twist her spine. She would never leave her family plot, living immobile and in great pain and loneliness.

Now she has a new destiny, thanks to cbm Child Sponsors. The muscles and skin around her ankle have been softened and a cast has prepared her leg for its new shape. The next major step is surgery to rebuild her ankle. Then Esther will begin a very long and arduous course of splints and braces.

She will need casts and splints for many years, but Esther has taken her first steps towards a better life. 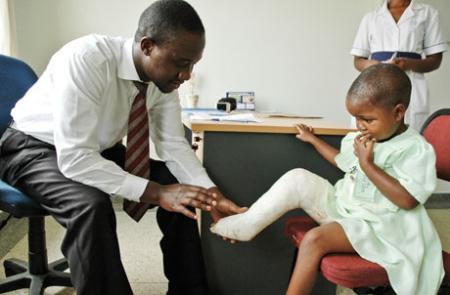 Esther’s clubfoot surgery has set her mother Nanyanzi free to make some very big and positive changes for the family.

When Nanyanzi was abandoned by her husband because he did not want a “cripple” child, the family income fell disastrously, to just CDN$23 a year. Because we have helped Esther become so independent, Nanyanzi has been able to start her own business, making $4.60 a day. A huge improvement.

Esther loves being able to help her mom with chores and play with other children for the first time in her life.

Her mother says, “I would never have believed that she would be able to walk one day, or that this surgery would be free of charge,” she adds gratefully.

Our physiotherapist Christine Tussiime says, “Esther’s mother does her homework and keeps on doing the exercises with her daughter. I can feel it in the foot. Everything is more flexible than a few months ago.”

With such a dedicated mother and generous sponsors, Esther has been able to make such big steps in her life – for her and her whole family.